Our third child was being baptized, and the priest did something at the end I’ve never seen before or since.

“Lay the child on the altar,” he said.

We walked forward, and Mark laid Clay down on his back as I smoothed the hand-crocheted christening gown around him.

I wish I could remember what the priest said as he prayed for us and for our son.   But all that remains after 20 years is a general impression of awe.  “My son is not my own,” I thought.  “I give him back to you, Father, he is yours.  For whatever you want.  Help us be worthy parents to him and to the others you have given us.” 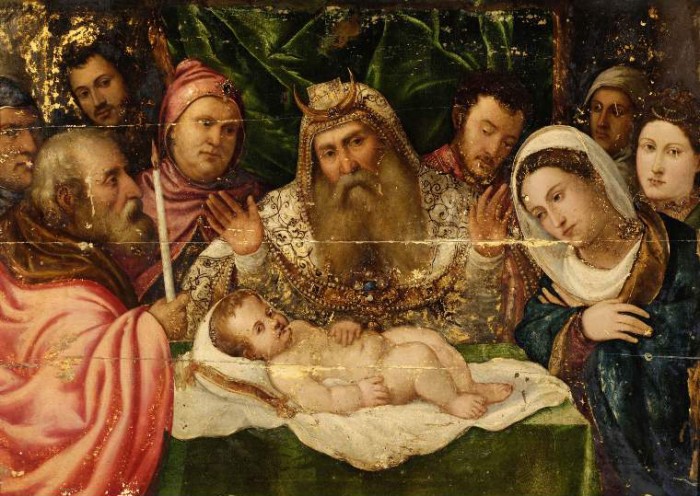 The Presentation in the Temple by Bartolomeo Veneto

I thought of Mary and Joseph presenting Jesus to God in the Temple, and for a moment I remembered Simeon’s words to Mary: “a sword will pierce your soul also.”  Do I want to give him up? I thought – then pushed the thought aside.  It’s probably a good thing I wasn’t thinking of the readings for this Sunday at the time, or I might have hesitated more!  In Genesis 22, Abraham hears God ask him to do what the priest asked of us: lay his son on the altar.  Only his offering was to end in sacrificing his own son.

It’s unthinkable, really.  “Take your son … your only one, whom you love … your own beloved son…”  All that Abraham was, all his hopes and dreams were bound up in that long-awaited child.  The promise of God was bound up in that child:  God gave his word that countless descendants would come from Isaac.  They’d be given land, and then become a royal nation that would bless all the nations of the earth.  All Abraham would have to do is … what?

Give up that son.

He gains it all for us – but only when he first can give it up.

We’re on a journey to Easter through the covenants, and I wonder as I read this: WHY?  Why does the Church take us, one by one, at this time of year, through the promises God made with people long ago?  What is the significance for me?

God’s covenant with Abraham begins to define the family of God, to which you and I belong.  That family came to be as blood descendants of Abraham through Isaac, that sacrificed son: but it is Abraham’s willingness to offer it all back to God that makes him “the father of all who believe” (Rom 4:11).  We can belong, who have faith like Abraham’s. 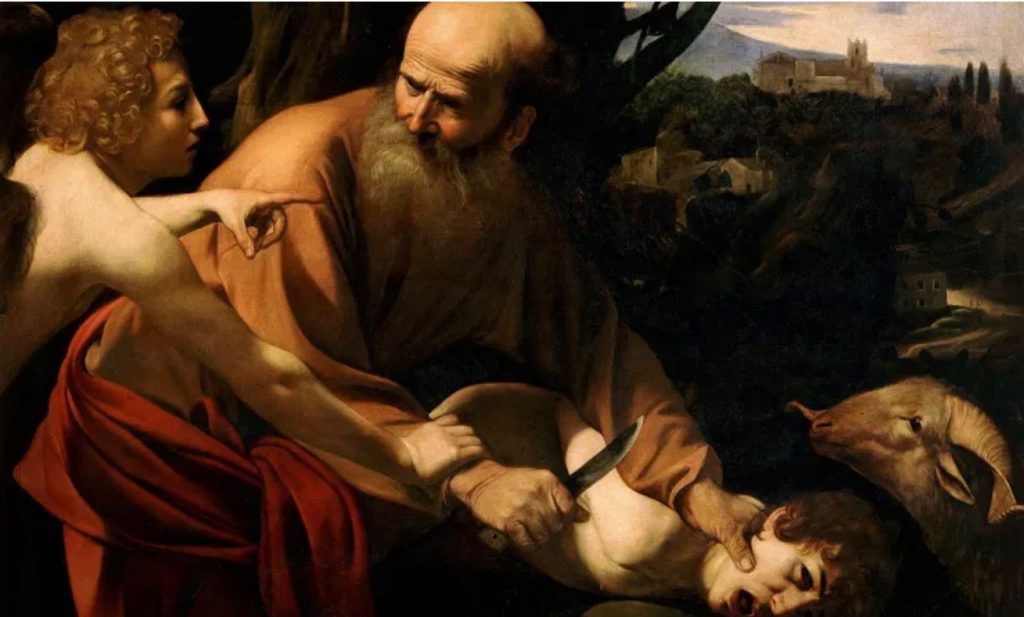 “The Sacrifice of Isaac” by Caravaggio

Through the covenant with Noah, we learned that God offers salvation from chaos and evil, from the terrible effects of sin.  But pulling Noah and his family out of the frying pan didn’t mean the fire was gone, that sin was conquered.  If you read on in Genesis, the first thing that happens after Noah’s new start is another fall.  God has to call Abraham out of the society that results.  He promises blessing to Abraham, but he’ll have to let go of earthly life, to get it.

The unexpected twist in the story is that God won’t just wipe away the effects of sin and hand us blessing on a platter.  The path to blessing lies through death.  But in the process, God defeats it.  By not sparing his beloved son, Jesus, he turns death into the very thing it claims to shut:  a door to life and glory.

Spend time in the Sunday readings this week.  Look for the common threads that criss-cross through them:  the “son” described in each; the theme of life and death; the idea of “withholding” or “sparing” (the same word, epheiso, is used in the Greek of Gen 22:12,16 and Rom 8:32); the surprise of resurrection.  Isaac prefigures Jesus “who died – or rather, was raised” (Rom 8:34) and who intercedes for us.  Death does not have the last say in our lives!

Psalm 116 provides our response to what we read:

I believed, even when I said, ‘I am greatly afflicted.’

R:  I will walk before the Lord, in the land of the living.

My grandma used to say to me, when I found myself dying to self in a difficult way – “Honey, remember: without a death there can be no resurrection.”  It’s also true that with death in Christ, there is resurrection.

It’s fitting, during Lent, to focus on sacrifice.  We lay ourselves on a virtual altar, giving up the things and habits we cling to, as we move toward the Cross where God gave up his own Son to die.  Maybe we wonder, at times, what it’s all for.  With the disciples after the Transfiguration, we “question what rising from the dead meant” (Mk 9:10).

It meant that Jesus had to die, and that his death took him to glory.  As we deny ourselves, let’s not forget: “the saying is sure: If we have died with him, we shall also live with him” (2 Tim 2:11).

LATER NOTE:  Several readers have asked whether I could give more details about the baptism, and one wrote in to say the priest had done this with both of her children.  She described it like this:

“The priest explained all the parts of the baptism.  Not until after the baptism (being washed clean) was she dressed in the white baptismal garment.  Then, after the lighting of the baptismal candle, he blessed a cross necklace and put it on her for protection.  Then we processed up to the altar. The priest held her in out stretched arms above the altar said “God our Father we present to you this child just as Mary and Joseph presented Jesus in the temple. We offer today thanksgiving for the beautiful gifts of life. And we place her on your holy altar as a sign to give her totally to you and to ask for your protection, through Christ our Lord”.  She was laid upon the alter toward the end of this and them taken off the altar by my husband.”

This was previously published February 27, 2015, on this site.

What have you learned from this series, or how has it struck you? I’d love to hear from you below (or email me at Sarah@ComeIntotheWord.com). Bless you!

Read about this series here:  Lent, Year B: GOD HAS A PLAN!

Coming next: 3rd Sunday of Lent: COVENANT WITH MOSES