There’s always such a push to Easter, and then … what? I’m grateful to the ongoing pulse of the season, that reminds me there is more.

In the liturgical cycle, Easter is a day and also an “octave.” Eight days of celebration, eight days of re-absorbing the message of the Resurrection: that because Jesus is alive, my life — all life — is different.

Let me entice you to discover what that might mean to you, by taking an intentional journey along with the readings this week. I love the way Gospel accounts of Jesus revealing himself to people after his resurrection are paired with glimpses of the impact it has on Christians, post-Pentecost. 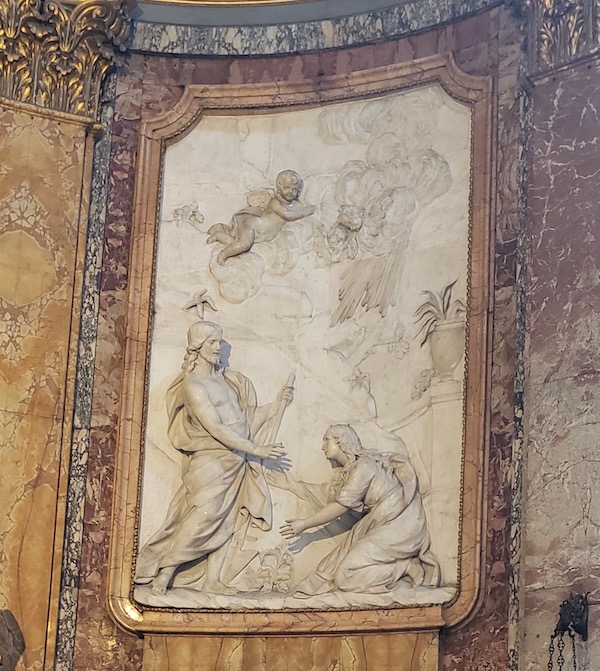 As you read, notice how Jesus takes the initiative to reveal himself to his followers in a time when they are in great pain and possibly doubt. Can we not ask him to reveal himself to us as well? As he does in the Gospel readings: to enter the locked rooms of our houses and hearts … to calm our fears … to feed us, to increase our catch, to open our minds to understand the meaning of suffering and death …to help us be open to accepting the witness of others.

Blessings on you this Easter Week (and beyond, as we continue our celebration through Pentecost)!

Here’s a preview and links to the readings on the USCCB website (though I encourage you to look them up in your Bible):

Matthew 28:8-15: That Jesus was raised soul and body is learned by Mary Magdalene and the other Mary, who Jesus meets as they run to tell the disciples that he’s alive. They embrace his feet (impossible if he were just spirit) and take his message to the others — while the chief priests bribe soldiers to say his body was stolen.

Acts 2:14, 22-33: Peter tells the crowds on Pentecost that not only did God raise Jesus from the dead, it was all part of his plan to save. We are witnesses that he lives, he says, and they are witnesses of the Holy Spirit poured out on the disciples.

John 20:11-18: Mary Magdalene again; this time weeping at the tomb, so wrapped up in her grief, she doesn’t recognize angels or Jesus. But then he calls her by name. There’s relationship here, even though he tells her to stop holding onto him — that he’ll be ascending to the Father — and to go, tell the disciples.

Acts 2:36-41: Still preaching on Pentecost, Peter tells those who crucified Jesus that God made him Lord and Christ (Messiah). Repent therefore and be baptized and receive the Holy Spirit, he says; and “save yourselves from this corrupt generation.”

Luke 24:13-35: Jesus walks alongside two disciples heading out of town after his death. Their hearts “burn” while he explains how Scripture pointed to him and they recognize him when he gives thanks and breaks bread.

Acts 3:1-10: The power of Jesus begins to flow through the disciples as in the name of Jesus, Peter heals a man crippled from birth.

Luke 24:35-48: Jesus appears among a group of disciples and they’re terrified, thinking he’s a ghost. He speaks peace to them, reassures them by letting them see and touch him and then by eating fish. He opens their minds to understand the Scriptures pointing to his passion and resurrection and mission and calls them to witness.

Acts 3:11-26: When people are amazed at his healing miracle, Peter attributes it to faith in the name of Jesus who God has raised from the dead. He calls them to repent that their sins be forgiven “and that the Lord may grant you times of refreshment and send you the Christ.”

John 21:1-14: The disciples don’t dare ask the risen Jesus if it’s really him when he leads them into a massive catch of fish after a night of catching nothing; they know it can be no one else.

Acts 4:1-12: Thousands of people come to believe through the disciples’ witness and the religious authorities arrest Peter and John. Previously timid Peter boldly proclaims that Jesus is “the stone rejected by you, the builders, which has become the cornerstone. There is no salvation through anyone else…”

Mark 16:9-15: Mark explains that hearing from eyewitnesses was not enough to make the disciples believe at first; it was only later, when Jesus appeared to them together and rebuked them for their unbelief and told them to go and proclaim the gospel to the world.

Acts 4:13-21: The authorities are confounded by the boldness of Peter and John and their witness. When they threaten, Peter and John choose to obey God and not them. “It is impossible for us not to speak about what we have seen and heard.”

SUNDAY, APRIL 19 (Divine Mercy Sunday and the close of the Octave of Easter)

John 20:19-31: Thomas refuses to believe until he sees and touches Jesus for himself. Yet even in doubt, he sought Jesus. “Blessed are those who have not seen and have believed,” Jesus said. John sums up his reason for writing: “that you may come to believe that Jesus is the Christ, the Son of God, and that through this belief you may have life in his name.”

Acts 2:42-47: The first Christians devote themselves to the apostles’ teaching, to fellowship, to the breaking of bread and to prayers. Miracles are done through the apostles and there are many conversions each day.

Peter 1:3-9: Peter speaks of the “new birth to a living hope” we have through the Resurrection, a hope that transforms even our suffering.