In 722 BC, the Assyrian army swept down into Israel. They captured most of the people of the northern kingdom and forced-marched them into exile, scattering them among foreign territories. These are the “lost tribes” of Israel; they never returned.

In 587 BC, Babylon conquered the southern kingdom of Israel, known then as Judah. They destroyed the Temple, set Jerusalem on fire, and deported the people. It was 70 years before the Jews began to return and rebuild.

This was tragic but not unexpected. The blessings of the Promised Land had come from God, and they had abandoned God in their hearts. Now they were living the true life of their longings: subject to other gods, enslaved by forces they could not control. 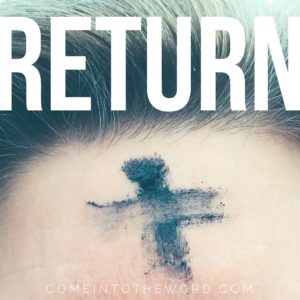 Israel’s story is our story too, and we revisit it every time Lent comes around with ashes and warnings to repent. Lent helps us leave behind those things that pull us away from God’s blessing and with new life at Easter, ushers us back into his loving arms.

Like the citizens of the northern kingdom of Israel, we can too easily seek to establish our own truth and decide the shape of our own religious practice, setting up virtual altars to things other than God (money? sex? power? you fill in the blank) and worshiping there. Or like those in Judah, we can do the right things — go to mass, pray, act the part — while ignoring the poor, the widows, the naked. Over time, that too ends in idolatry as it did in Jerusalem.

As you enter Lent: is the kingdom of your heart divided? Have you wandered away or given your heart to something other than God? Lent, like the Old Testament prophets, calls you to return. It reminds you of God’s unbounded love that is ready to take you back, whatever you’ve done or wherever you’ve gone. It reminds you that even in exile, he is with you. It calls you to repent: to a restored relationship with your loving father. And it provides (through prayer, fasting, almsgiving, and Reconciliation) the means to break away from all that has turned your heart, and return.

Listen to the voices of the prophets:

Today, Ash Wednesday, allow fasting to awaken your heart to its true hunger for God. Pray together with Catholics all over the world, today’s collect:

Grant, O Lord, that we may begin with holy fasting this campaign of Christian service, so that, as we take up battle against spiritual evils, we may be armed with weapons of self-restraint. Through our Lord Jesus Christ, your Son, who lives and reigns with you in the unity of the Holy Spirit, one God, for ever and ever. Amen.

The story of Israel’s long march away from God, despite his blessing, and plunge into exile is told in 1 and 2 Kings and 2 Chronicles. The voices of the prophets fit in here: particularly Amos and Hosea to the north, and Isaiah and Jeremiah to the South. Make them part of your Lenten reading. They are full of not just warnings but of hope and consolation. God’s motivation behind all that he does is to love and restore his wayward people.