“And in that region there were shepherds out in the field, keeping watch over their flock by night…. And the angel said to them, ‘Be not afraid…; for to you is born this day in the city of David a Savior, who is Christ the Lord. And this will be a sign for you: you will find a babe wrapped in swaddling cloths and lying in a manger.'”  (Luke 2:8,10-12)

A king in a cattle-shed? You couldn’t make that one up if you tried.

Imagine being one of those shepherds in Bethlehem, watching your sheep at night.  I’ve been in the shepherds’ fields there.  They’re nothing like you imagine if you live in America.  Here’s one I visited last fall, complete with shepherd and sheep (they look like rocks down in the field): 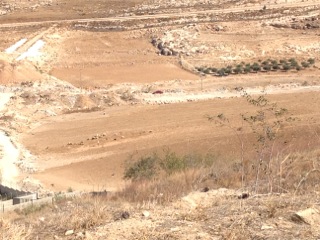 A Shepherd watches his flock; taken from the Shepherd’s fields in Bethlehem, Israel

If the skies lit up with angelic beings there, you couldn’t miss them.  There’s nothing else to look at.  And what a message!  Back then, anyone hearing that a savior was born in the city of David who is Christ the Lord would know to expect the Messiah, heir to David’s throne.  The king and savior (no doubt from the Romans, they thought) who was promised by God.  What a message, indeed.  But one with an odd twist; this king would be found as a swaddled baby lying in a manger–a feeding trough.  Only a sky full of trumpeting angels could make anyone believe that story.

The field I’m standing in to take that picture is on a hillside riddled with natural caves.  Many scholars believe that it’s in a cave like these that Mary gave birth to Jesus, and laid him in a manger meant for the animals. 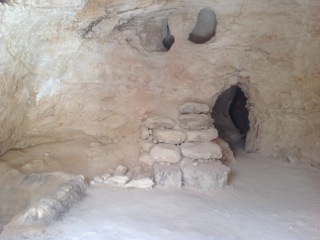 Inside a cave in the Shepherds’ Field, Bethlehem, Israel

I imagine the shepherds approaching that hillside at night, seeing lamplight shine from the mouth of a cave.  Is that how they were able to find him?

Vss. 17-18:  “And when they saw it they made known the saying which had been told them concerning this child; and all who heard it wondered at what the shepherds told them.”  No kidding!  Any birth is special – but to say this is the messiah?!  The news would be hard to take in, but for the witness of the shepherds and the unexpected drama of the sky full of angels.

Mary did not wonder.  Rather, she “kept all these things, pondering them in her heart” (vs. 19).  I too need to ponder this mystery; how and why God would come to us himself not in glory but as vulnerable as this tiny child, as poor and as humble, in a cave with a manger as a bed.

They named him Jesus, “God with us,” because the angel told them to.  He’s with us still, and not always where you’d expect.

Open our eyes, Lord, to your presence – especially in the poor and the humble and in the unexpected places and circumstances of our lives.