I have never been fast, and even at four I knew I could never outrun a dog — let alone two big ones, as happened to be the case. They came charging across the lawn and all I could do was cry for help. Richie came out of nowhere and grabbed me, made me stand on his knee and then pushed me up into the tree. I’ll never forget the difference it made to be up high, above the danger. The dogs stood with their paws on the trunk, barking and barking and I just sat, secure, in peace.

“Lead me / to the rock that is higher than I,” King David wrote in Psalm 61. “…for you are my refuge, a strong tower against the enemy.”

“Rock” is an Old Testament metaphor for God 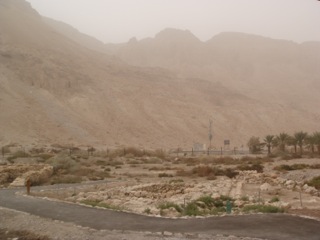 The hills of the Judean desert. © Sarah Christmyer.

To be in the desert where David spent much of his time is to be exposed: to the perils of heat and drought, to boredom, to bandits, to enemies. Shelter is found mainly in rock caves and crevices. Rock is strong and can be relied upon. And on top of a large rock, you can see for miles and ward off enemies. Fortresses are built on high places for a reason.

God is immovable and strong like a rock. He is a safe refuge and fortress. But what if we feel far away from him? How do we get to that rock of safety?

“From the ends of the earth I call to you,” David cries, “when my heart is faint…

The lines are broken up like that in my Bible, with “Lead me” all by itself. It stands out and begs for attention. This is a psalm for people who are far from God, who need help getting to the rock like I needed help getting into that tree. But it’s not a cry of desperation. It’s full of assurance that God will reach down and take David where he needs to be, to be safe.

David asks God to lead him to safety based on the fact that God has done so in the past: he’s been his refuge, a strong tower, a God who has “given me the heritage of those who fear thy name.” God promised Israel the heritage of the promised land, and he gave it to David and his successors forever. David knew God’s promises and his faithfulness to his people. It was because of God’s character and past actions that David had faith to rely on God’s help in his present situation.

We have the same reasons to trust

God is the same yesterday, today, and forever. Make this psalm yours! At the end of the psalm, David determines to sing praises and pay his vows “day after day.” We can do that too: put one foot in front of the other, daily calling on the Lord in prayer and praising him. With that movement, we stretch our arms to God and beg to be held within his stronger arms, “safe within the shelter of (his) wings” (vs. 4).

Spend some time meditating on Psalm 61. As you do, recall that the Church fathers saw the “shadow of God’s wings” as the shadow of the Cross. Jesus’s arms are outstretched even now, reaching out and calling us to himself.