You can’t blame them, really. The men who raced toward the Temple were only following instructions. Just moments before, they were lepers: living on the fringes of society, forced to keep a distance from other people, shouting “unclean, unclean!” to everyone they saw. But now—they are healed! 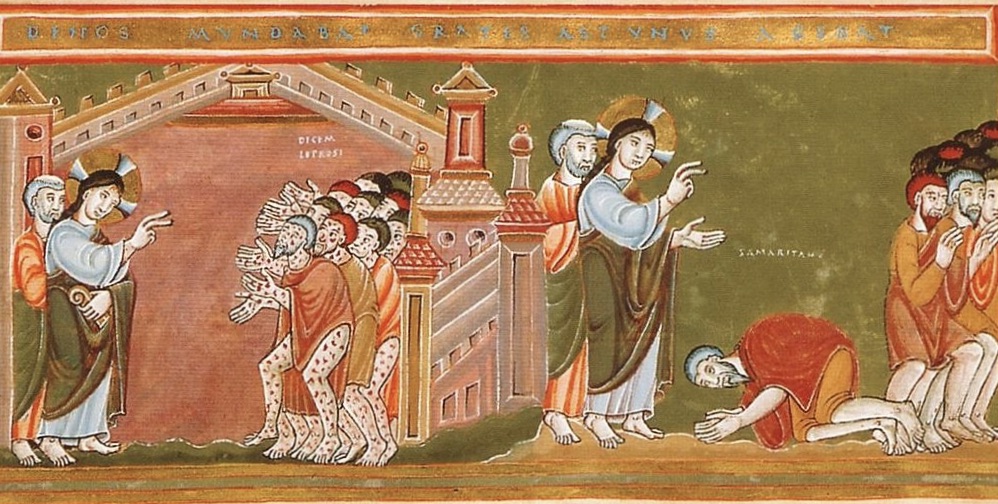 It was all due to Jesus, the rabbi everyone was talking about. When the ten men saw him coming that day, they kept at a distance. They called out, but not to warn him.

“Master, have mercy on us,” they cried.

He didn’t recoil or rebuke them. In fact, he didn’t do anything at all. Just a simple command: “Go and show yourselves to the priests.” There was only one reason to do that, and that was to be declared clean if you had been healed.

They still had leprosy, but off they went. Because of that faith, they were cleansed on the way. Imagine their joy! Did they notice it first on their own bodies? A lack of itching maybe, or a burst of tingling after being numb? Or did they see the change first in the others? Imagine it! I see ten men stare at each other… then sprint for the hills. Jerusalem, here we come! Each trying to get to the priests first, to show the miracle of resurrected health, to get their ticket back into society and home.

All but one, that is. One man didn’t go. The non-Jew among them ran back to Jesus “glorifying God in a loud voice.” The loud leper-cry of warning became a shout of praise. Gratitude refocused his attention and turned him around. 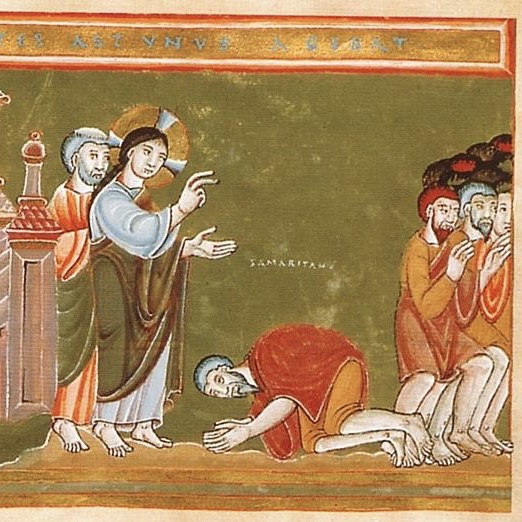 Up to now, all is as it should be. The Jews go to the priests as instructed. The Samaritan (who is not welcome in Jewish society in any condition) returns to the one who healed him. Jesus sends him on his way too, declared well by virtue of his faith. But first, he says something surprising: Where are the others? Weren’t there ten of you? Could no one return and give praise to God except a foreigner?

There’s more to faith than believing

Nine men did exactly as he told them to. Presumably they could offer thanks at the temple. By drawing attention to the Samaritan, Jesus shows us that there’s more to faith than believing something’s true and obeying the rules. Jesus healed their bodies to show them what he longed to do for their souls: not just restore them to the community, but ignite heart-felt worship and a new relationship with himself. Their physical healing was meant to turn them toward the healer.

“Faith is first of all a personal adherence of man to God,” it says in the Catechism, 150. Faith begins in relationship, and it overflows in worship.

How do you give thanks?

I think of how often I fall to my knees and cry out like those lepers to God. I’m in a mess of trouble or the bank account’s empty or my child has wandered away. Sometimes grief or shame isolates me from the community. Turning to God for help is itself an acknowledgement of relationship. But when God answers my prayer: how often do I jump up joyfully like the nine and re-enter life without a nod in his direction? Do I treat him like a cosmic vending machine, or like a Father?

It’s not always convenient to thank. Maybe that’s why Psalm 116 calls thanksgiving a “sacrifice.” Think about this: the “thanks” the Samaritan leper gave to Jesus is, in Greek, eucharisteo. It’s an offering of ourselves in response to the greatest offering of all. It binds us together as one.

Sin (including the sins of pride, selfishness, and pre-occupation) separates us from a close relationship with God the way leprosy barred the Israelites from community and worship. Yes, Jesus wants to heal you. But he longs more than anything to turn your attention to him, to where you can enter back into his love.

What has Jesus done for you lately? Have you thanked him? For what are you approaching him, begging him? When he heals – how will you respond?

© 2019 Sarah Christmyer. This post also appeared on the WINE: Women In the New Evangelization blog.