Six heart-shaped rocks line the shore at Tabgha on the northwest shore of the Sea of Galiliee.  They may have been pulled from an ancient quarry, remnants of old synagogues which traditionally had two heart-shaped columns at the rear corners.  Sometime in the fifth to ninth century AD, they were placed in a colonnade commemorating the Apostles and called the Twelve Thrones.

Depending on the height of the Sea when you visit, the “thrones” might be under water or they might be high and dry. 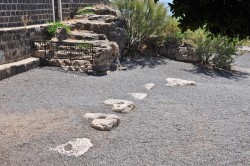 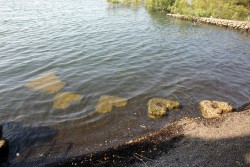 Scholars point out something vital that is missing in our English translation of John 21:15-17:  Jesus and Peter use different words for “love.”  Twice, Jesus asks if Peter if he loves him using the Greek word agape:  total, unconditional, to-the-end love.  “Yes, Lord, you know I phileo you,” he replies.  Phileo is brotherly love.  (This exchange reminds me of something girls used to say when a young man used the “L word” prematurely.  “I love you in Christ,” she would answer.  That was the kiss of death, as far as any kind of romantic commitment went!)  There is love and there is love, and Jesus wanted all of Peter’s heart.  It would take that kind of love, where he was going, if he was to die for the Lord. 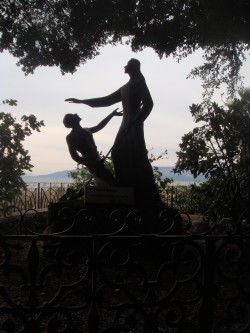 “Peter, do you love me?” Statue at Tabgha, Israel. Photo by Sarah Christmyer.

Peter’s previous denial of Christ (Lk 22:54-62) must have weighed on his own heart like a millstone.  He couldn’t bring himself to promise total, faithful love.  He was too aware of how easy it was to fail.  The Lord’s own love goes unspoken, but it can be felt in his persistence.  Gently, quietly, he blows on the embers of love that lay buried beneath the rejection.  It’s not too late, Peter.  Do you love me / will you go the distance with me now? Will you agape me to the end?

The third time, Jesus aims his question at the level of Peter’s heart: “Do you phileo me?”  No wonder Peter was grieved (see vs. 17).  Not only had Jesus asked a third time, he had lowered his expectation. “You know everything,” Peter answered.  You know I denied you.  You know that I only phileo you. How miserable he must have been!  “Feed my sheep,” Jesus said.  You’re going to get there.  In the end, you will glorify me in your own death (vs 19).  Don’t let your regret get in the way of doing what I’ve called you to do! 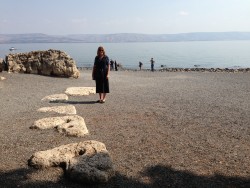 I stand on the shore of the Sea of Galilee, looking at the Twelve Thrones.  Peter, chief among the apostles, was “Rock” when he spoke what God revealed to him, that Jesus was the Messiah (Mt 16:16).  A few verses later, thinking on his own and rebuking Jesus for saying he would suffer and die, Peter the Rock has become a “stumbling block” (vs. 23).  Christ built his Church on a man of good intentions who was fallible, weak as we so often are.  Why? It is God’s power, not our strength, that carries the day.  God’s power, not ours, that accomplishes his will.  God’s power, not ours, that defeats evil and enables us to love. Peter – fallible in his own power, infallible in God’s – helps us understand.

“Don’t get lost in regrets,” I hear you reply.  “Feed my sheep. Do what I’ve given you to do.  Move forward, one step at a time, relying on me.”

I see the tiny heart enclosed in the bigger one as not just Peter’s, but my own heart enveloped by the greater heart of Jesus. 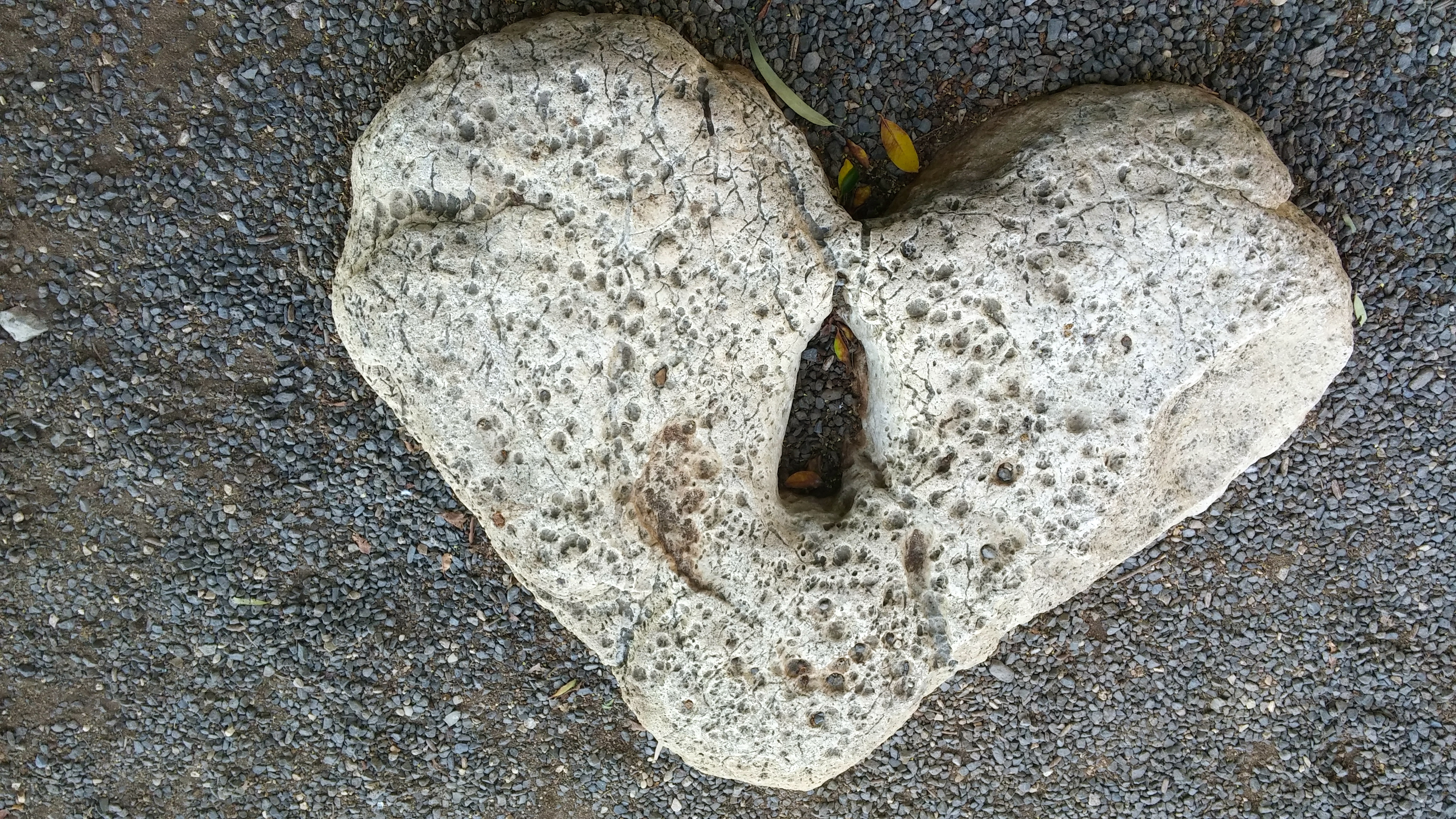 “If people shut you out – just draw a bigger circle of love around them,” my Grandma used to say.  Like Jesus surrounded Peter’s insufficient love with his own, and in the end made the “stumbling block” a Rock for the Church.