It’s been a long time since I’ve been in a crowd, due to COVID. I’ve almost forgotten what it’s like. Maybe that’s why it stands out to me as I read through the early chapters of Mark’s gospel: people are everywhere. Jostling, asking, listening, questioning, pleading for help. They crowd into Jesus’ house so he can’t eat in peace. They threaten to crush him on shore, so he teaches from a boat. He has to get away to pray.

He had to be tired.

There’s this very human scene in Mark 4:35-41. He’s been teaching all day long, after a whirlwind tour of Galilee during which he’s under a constant crush of people. It’s evening and he suggests to his disciples that they cross to the other side of the sea.

“Leaving the crowd, they took Jesus with them in the boat just as he was,” it says.

That phrase struck me: “Just as he was.” How was that? Exhausted? Must be, because before you know it, he’s passed out on a cushion in the back of the boat. He’s so tired, he sleeps through the violent storm that comes up. Waves are crashing in; the wind is wild. I can see the disciples frantically bailing out the water, trying to keep the boat from going down and somebody notices that Jesus is still asleep. They shake him awake. “Teacher, don’t you care that we are perishing?”

I think all they expected was for him to pull his weight, maybe bail from the back or help somehow to hold things steady. Or maybe if they’re truly going down, to lead a prayer. They did not expect what he did. He raised his voice against the wind — and it stopped. 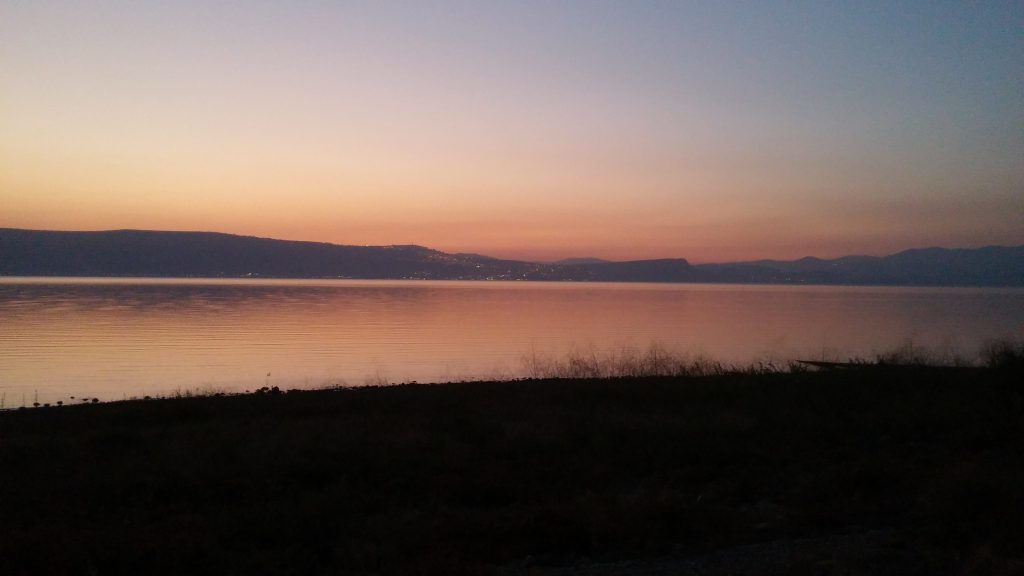 Night (and peace) falls on the Sea of Galilee. Photo by Sarah Christmyer.

Whoa! Who is this guy? they ask.

Maybe Mark wrote this to show that Jesus is divine. But today it’s his human side that stands out to me. He’s someone doing his best to teach and heal and help and getting worn out in the process. Overwhelmed to the point of sleeping through danger. And in his disciples’ reaction, I see him through their eyes. He’s a revered teacher, sure; but he’s also someone they take “just as he was,” who they are comfortable enough with to shake awake and ask, “don’t you care?” They presume on his compassion. His divinity and power is dawning on them, but they know his humanity as well. He is first their friend.

I want to know the Lord like that. As a friend and a brother. To have that familiarity with Jesus, that I assume that even when he seems asleep, even when my faith falters, I can call on him and expect his help — and learn that yes, he does care after all.

Lord, I believe. Help my unbelief, especially when I feel alone. Thank you that you’re never too tired to care for me.