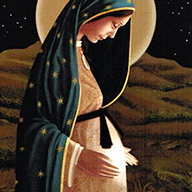 Lounging in my robe and slippers one New Year’s morning, my attention was caught by the scene over the fireplace. Candles, stars, and angels surrounded the Holy Family: the baby in his mother’s arms, Joseph standing by and looking on with love, Mary “keeping” the message of the shepherds in her heart.

I was meditating on the readings for the day.  “When the fullness of time had come, God sent his Son, born of a woman…” (Gal 4:4).  What a fabulous mystery that is, that the eternal God would come to earth – not just as a man but as an infant born as any child, to a human mother.

I’d been Catholic for more than 20 years, and it took that long for me to grasp the role that Mary played.  It came to me in little bursts and flashes.  That day, because we celebrated the feast of Mary the holy Mother of God, and while I sat there looking at the crèche, the significance of “Mother” in that title exploded in little lights inside my brain.

I grew up equating “God” with “God the Father,” which made “Mother of God” hard to hear and near impossible to say. I’d hear Protestant voices in my head:  “You can’t call her that,” they’d say, “she’s not God’s mother!” “That would make Mary some kind of goddess, or part of the godhead!” and so on. I had to train myself not to think that way. Each time I would say to myself, “The mother of Jesus, who is God.” Or “the title says that Jesus (born of Mary) is God, it’s not saying God has a mother.”

All of which is true — but when I stop to focus on Jesus being truly God, the “mother” part gets lost.

Anyway – what struck me that morning is that being a mother is all about receiving, not creating.  A mother does not initiate the seed that she receives; if she did, she would not be “mother,” but “father.” Mary’s maternity presupposes the Father and points to him.  He, not she, is the author of that life.  She can only receive life and nurture what comes from Him.

That Mary is Mother of God does not make her a goddess.  It points to her humble “yes.” 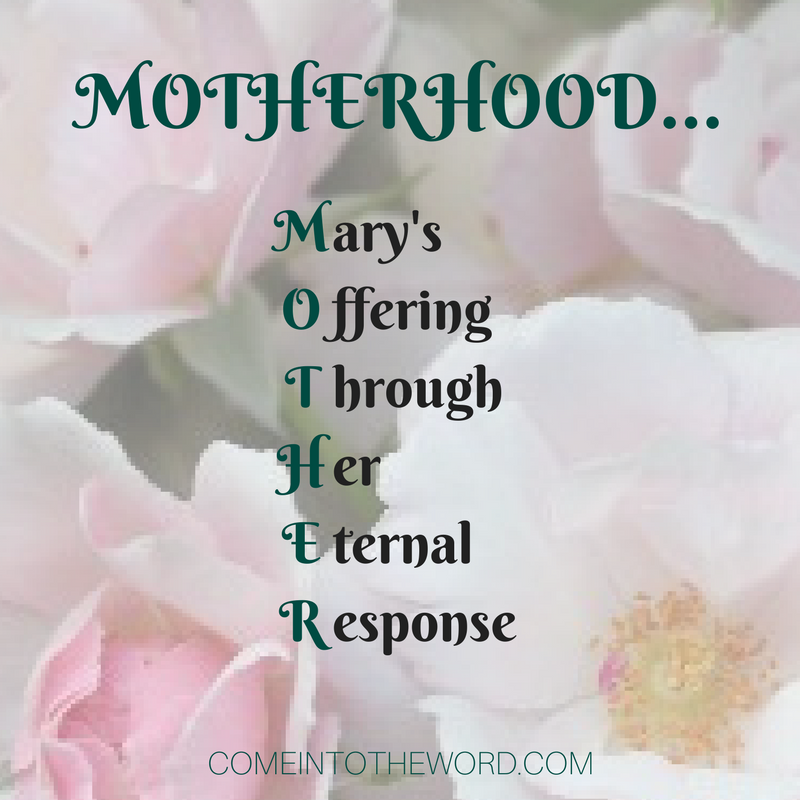 We can’t shy away from that title, Mary the Mother of God.  In it lies the mystery of our redemption: that God didn’t just visit us on Earth, he came through a woman—a mother—so that he could share our nature and be a man while being God.  That is the scandal of the Incarnation: that God would stoop so low.

We could not be saved without God, but He would not save us without us.  And because of Mary’s “yes,” due to her real motherhood, the same mystery can take place in us.  We too can offer our “yes,” receive God’s life, and bear him to the world.

Pray for us, O Holy Mother of God, that we may be made worthy of the promises of Christ.

For my Protestant friends – here is an article that provides more background and reasons for the title Mary, Mother of God, as well as Christian witness going back to the 2nd century: https://www.catholic.com/tract/mary-mother-of-god