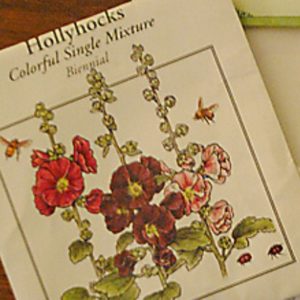 On a shelf by the mudroom window is a packet of seeds. Purple, red and pink hollyhocks flourish on the cover and provide nectar to the visiting bees.  For five years, now, I’ve gazed at that picture and dreamt of hollyhocks nodding along the side wall of the house. Five years! Somehow I never have the nerve to plant them. To begin with, preparing the soil there would be a massive job. But really, I’m afraid of failure. I’m afraid of weeds and deer and rabbits. I’m not sure I have it in me to grow such beautiful things. And I’m afraid the dream will die.

Those seeds came to mind when I read the Sunday gospel for this week (John 12:20-33). Jesus has just entered Jerusalem for the last time, lauded like a returning king by his countrymen. Now some Greeks want to see him, too. They want in on the glory! And yes, it’s time for his glorification, he says. But it’s not going to look anything like anyone imagines:

It occurs to me how easy it is to settle for the picture on the package, the trappings instead of the real thing.

In the case of my seeds – there’s risk involved, and pain and dirt and bother. Nothing like what is required of Christ (or of those who follow him), but still. What is so very evident when I step back and look at my seeds is how far the benefits outweigh the cost! A handful of tiny brittle seeds that look like bits of dirt, they’re good for nothing else – but plant them properly, and glorious life explodes from inside! How foolish it is for me to try to satisfy my longing with a picture, when I could have real flowers to see and touch and smell and harvest for the house and plant again. 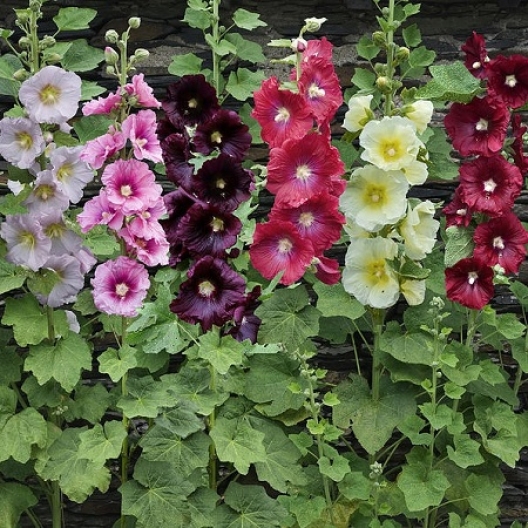 Jesus is preparing his disciples for his death. Like the time a seed spends in the ground, that looks like loss. Yet the planting of a seed is full of hope, as the planting of that Cross will carry hope. “I am troubled now,” Jesus says. But this is why he came! If he doesn’t die, he’ll be useless like a seed left on a shelf. But if he dies—all kinds of life will come. For the Jews and also for the Greeks. For you and me, as well. And when we die with him, we also live with him. That is the glorious payoff.

The Christian life is hard, and Jesus doesn’t gloss it over. Anyone who thinks following Christ will erase all pain in this life, has another think coming. Just look at the Second Reading this week, Hebrews 5:7-9. Jesus prayed and cried his eyes out to God who could save him from death, “and he was heard.” But he wasn’t saved from the cross! Yet planted there, he “became the source of eternal salvation for all who obey him.”

The only way Christ bears this fruit of salvation is by dying first. He wants us to see that about himself so we’re not afraid or scandalized by his death, but also to give us hope when we face our own crosses in this life. Instead of reading what he says in this gospel and fearing what might come our way, let’s read it for the certain future hope it holds (see vss. 24-26):

Jesus, thank you for this image of the seed that dies in order to yield life. Help me not to settle for a picture of what might be, but rather to hate my earthly life and take up my cross for the glories that you promise are to come.