My most vivid childhood memory of Easter is the Palm Sunday morning we visited a community of religious sisters.  I must have been six or seven years old.  Not being Catholic, it was my first real exposure to liturgy – and what a liturgy it was!  I’ll never forget processing through the courtyard, waving big palm branches above our heads and calling out, “Hosanna!” That was quite a day.

It came as a surprise when, as a Catholic adult, I found that the “palm” part of this Sunday only forms a kind of prelude to a mass that focuses on the suffering and death of the Messiah who was hailed in that procession. 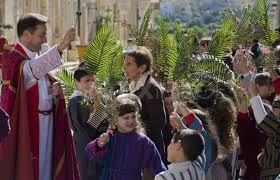 The Messiah: dilemma of the suffering king

We’ve been viewing the Sunday readings through the lens of the Old Testament reading, which until now has been about God’s covenant relationship with mankind. On Palm Sunday, the focus shifts to the Suffering Servant foretold by Isaiah: in four “servant songs,”[1] the prophet tells of a Servant of Yahweh who is abused by those to whom he is sent and who sacrifices himself for their sake.

A few ancient rabbinic sources saw the Messiah reflected in one of them (Isa 53:3, “he was despised and rejected by men; a man of sorrows, and acquainted with grief … and the Lord has laid on him the iniquity of us all”) — but traditionally, Isaiah’s Servant was seen as a metaphor for the Jewish people as a whole.  At the time of Jesus, the expectation was that the Messiah would be not a servant but a triumphant king, delivering the people from Rome and establishing an earthly rule.

It is not surprising that the same people who shouted “Hosanna” to the king on Palm Sunday, cried for his crucifixion several days later.  He was not who they expected.  What has happened to God’s covenant?

Jesus himself gives the answer, in the Gospel reading.  At the Passover celebration, “he took a cup, gave thanks, and gave it to them, and they all drank from it.  He said to them, ‘This is my blood of the covenant, which will be shed for many.’” 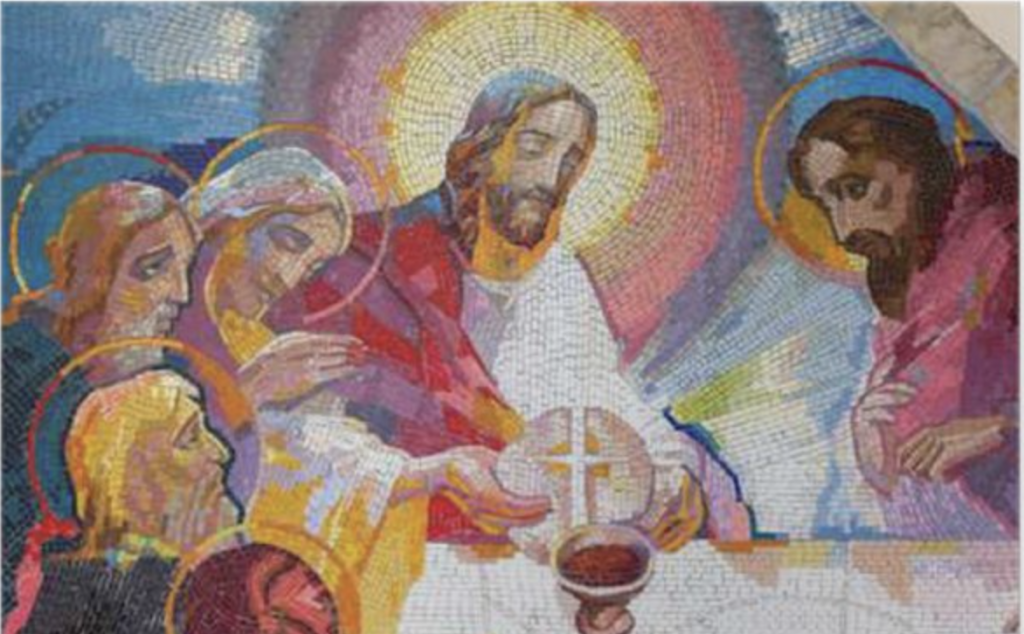 Mosaic, Institution of the Eucharist, Medjugorje

I wonder what the disciples thought, when he said that? In hindsight, we can see. By calling the cup the “blood of the covenant,” Jesus was saying that his blood that was soon to be shed, would seal a new relationship between God and man. He would suffer for our sins; his death would pay the price for the broken covenant; and now we who share in his death through baptism can also share in his resurrection life and enter into that covenant relationship.

Just like back then, Jesus appears to us today in many ways.  Sometimes, he’s drawn into the public square.  It’s easy to laud him when he appears triumphant.  But when he’s battered and bruised, maligned, spat on: do we join the crowd that condemns him?

The Church gives us a daily dose of Isaiah’s Servant Songs to meditate on this week, as follows:

The darkness of these songs is lit with messages of hope and courage.  You can find the mass readings every day on the USCCB website.  Consider meditating on them during Holy Week as part of your “Lenten covenant” with God.  May they help you enter into his sorrowful passion and see the golden crown beneath the crown of thorns; may they help you to say, with the centurion — even when things look their bleakest — “Truly this man [is] the Son of God!” (Mk 15:39)

It seems fitting to close with the Palm Sunday second reading, this hymn from Philippians 2:6-11:

Christ Jesus, though he was in the form of God,
did not regard equality with God
something to be grasped.
Rather, he emptied himself,
taking the form of a slave,
coming in human likeness;
and found human in appearance,
he humbled himself,
becoming obedient to the point of death,
even death on a cross.
Because of this, God greatly exalted him
and bestowed on him the name
which is above every name,
that at the name of Jesus
every knee should bend,
of those in heaven and on earth and under the earth,
and every tongue confess that
Jesus Christ is Lord,
to the glory of God the Father.

This was previously published March 28, 2015, on this site. It has been slightly edited.

What have you learned from this series, or how has it struck you? I’d love to hear from you below (or email me at Sarah@ComeIntotheWord.com). Bless you!

Read about this series here:  Lent, Year B: GOD HAS A PLAN!