Two-year-old Evie watched as the ladies at the next table started in on their salads, then kicked her legs to get their attention. “Aren’t you going to pray first?” she asked. After all, they had smiled and voiced their approval as she carefully touched her finger to her forehead, heart, and shoulders before we thanked the Lord for our food. Sheepishly, they set down their forks, bowed their heads, and observed a moment of silence.

From the mouths of babes!

I hadn’t really considered grace before meals to be a form of witness, but it seems it can be. I don’t know what those women thought as they closed their eyes. I do hope they considered God and his grace; I hope they paused to be grateful. After all, praying before meals is a powerful means of practicing gratitude—wherever we are. 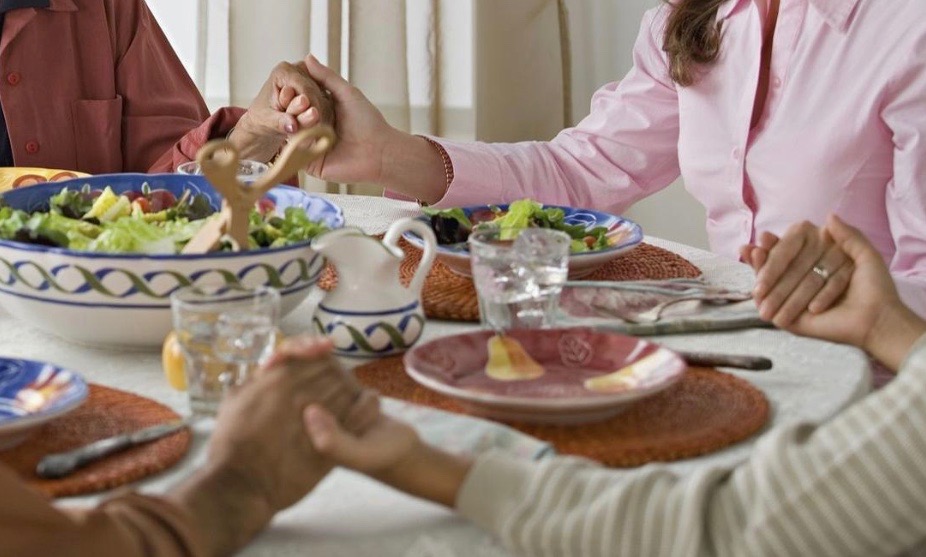 I’m generally a private person, but the more our culture works to shove expressions of religion into the closet, the more I find it necessary to make small signs of recognition to the Lord. Scripture tells us to praise God “among the nations” (see Psalm 18:49; 105:1-2; and Isaiah 12:4, for example). What does that mean, if not to recognize God publicly among those who don’t know him? If we never mention God in public or model the kind of thanks that he deserves—how will anyone who doesn’t already know, come to discover him?

As I watched Evie modeling gratitude and prayer in that restaurant, I thought in a new way about something St. Paul said:

Give thanks in all circumstances; for this is the will of God in Christ Jesus for you. (1 Thessalonians 5:18)

This normally reminds me that I can maintain an “attitude of gratitude” even when things aren’t going my way. Today it’s impressing on me that giving thanks is not the kind of prayer I should keep in my prayer closet. I can thank the Lord “in all circumstances” when the situation suggests it: even if I’m in a restaurant before a meal, or at a doctor’s office responding to some test results, or with neighbors who have asked about our grown children.

And whatever you do, in word or deed, do everything in the name of the Lord Jesus, giving thanks to God the Father through him. (Colossians 3:17)

I find it’s not always easy to do that. Especially if the people I am with don’t share my faith. I think of Daniel in the Old Testament, living as an exile in Babylon, praying by his open window where everyone can see him (even when it became against the law). Praying where people could see him is what sent Daniel into the lion’s den. It’s also what led to an extraordinary demonstration of God’s power and a complete reversal of the law, so that the Lord was honored by all. As God tells us in Psalm 50:23,

He who brings thanksgiving as his sacrifice honors me;
to him who orders his way aright
I will show the salvation of God!

Giving thanks can be a sacrifice. Let’s not let that stop us! May the small, daily sacrifices, like public grace before meals, prepare us in case more is required.

Blessings on you as you read the Word and practice it in the day-to-day.