COVID has put a damper on our usual Super Bowl festivities. Three years ago, when I first posted this, we crowded with family and friends into the den, feasting and celebrating an amazing Eagles win! This year, it’s just two of us. But I’ll be watching Tyreek Hill as closely as I watched Alshon Jeffery for that game: because the way they receive the ball is just as pertinent today, as a lesson in how we receive the Word of God.

Used to be, a wide receiver wanted nothing to come between his fingertips and the football. 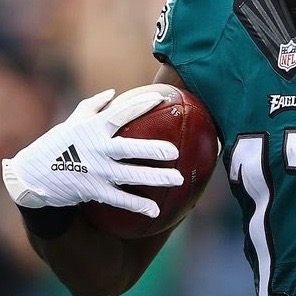 But it’s a fair bet that when the Eagles and Patriots file onto the field this weekend, anyone who anticipates touching the ball will be wearing high-tech, sticky gloves. And if Alshon Jeffery makes a three-fingered catch the fans will cheer! — but no one will be surprised. It’s his job to catch the ball … hang onto it … and run it downfield, if he can. And God forbid he ever lets go.

When you’re a receiver targeted by the quarterback, what matters even more than catching the ball is holding on to it. Hence the special gloves, which help with both!  Likewise, when you’re the target of the Word of life, what matters most is to receive (not merely read or hear) the Word; to then hold on to what you hear; and to run with it toward your eternal goal.

I press on toward the goal for the prize of the upward call of God in Christ Jesus.

How good of a receiver are you? Lectio divina (“divine reading”), that age-old practice of reading Scripture until it turns to prayer, can help improve your game.

Lectio divina is generally thought of as a process with four steps: you prayerfully read a passage of Scripture; you meditate on it, allowing it to soak in and begin to work inside you; you talk to the Lord about it, responding in prayer (and determining to practice); and finally you contemplate—you rest in the Lord’s presence. When we make a habit of reading the Word this way, it takes root. It begins to transform us from the inside out.

Thinking again of that wide receiver, it occurs to me that we can learn a thing or two from what he does.

To begin with, get your eyes on the QB. That’s God, our heavenly father, who longs to talk to you and who does so (in part, but very definitely) in the Bible.

In the sacred books, the Father who is in heaven meets His children with great love and speaks with them

Like the wide receiver, who runs into position and gets his hands and eyes in the path of the ball, prayerfully put yourself in the Lord’s presence and expect him to speak. With your attention on the “QB” – God – fix your eyes on the “ball” of the word. Read the passage several times if needed. Focus. Get it firmly in your sights.

A football catch often starts with the fingertips, then the hand, then the crook of the arm and the chest.

In the same way, “grab onto” the word or words that stand out to you, and don’t let it go. You might have to mull it over first. Don’t just read. Listen. What do you hear? Meditate. Allow it to sink in. Hold the word close to your chest, in your heart. Receive what it says, don’t try to direct it.

Can you imagine a receiver gazing at the ball, admiring the perfect spiral, its arc through the air, then turning to another player and saying “will you look at that ball? It’s perfect!” If that’s all he does, he’ll find himself out of job!l

…so shall my word be that goes forth from my mouth;
it shall not return to me empty,
but it shall accomplish that which I purpose,
and prosper in the thing for which I sent it.

Ask as you meditate: Why this word to me, today? What is the goal? What do you want me to know? To learn? To do?

Sometimes in football, the goal is just a catch. And sometimes our goal is simply to take the word and plant it like a seed so that later, it can germinate. Allow God to choose and direct his words. Our job is to receive, and let him do his work even though it may be out of sight.

Overall, you may not make a lot of touchdowns. But that’s OK. In fact, that’s part of the game. Sometimes the ball will sail right past you. You may fumble a few. Some throws you’ll set right down, or you’ll move just a few yards. But the more you do it, the more forward progress you will make.

When you read the Bible, try not to be just a spectator. Spectators sit in the stands (or in the comfort of a living room) and watch the action, analyze the plays. Sometimes it’s exciting, and to the fan it seems as good as being in the game! But no fan ever received the ball or ran it through the end zone. And when the game gets boring, it’s so tempting to wander away for chips and soda or to join another conversation, instead of getting back into position, eye on the QB, eye on the ball.

Be a player. Be a receiver! We’re not meant to be spectators of Scripture. The Bible is the Word of God, a personal message from the Lord of the Universe, directed to our hearts.

P.S. Just in case you can’t tell by the photo, this household bleeds Eagles green! 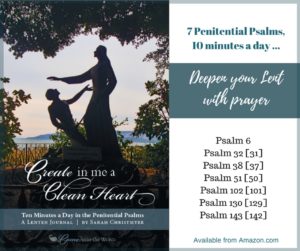 Practice receiving the Word this Lent. This simple journal walks you through the seven penitential psalms, one psalm a week, practicing the steps of lectio divina as you go.

Available at this link from Amazon.com.