The man behind the counter wore long sleeves, but they weren’t long enough to hide his tattoos. Enough of the elaborate script showed at one wrist to make me curious.

He pushed his right sleeve up to his elbow, and read out loud from the gothic script on his forearm: 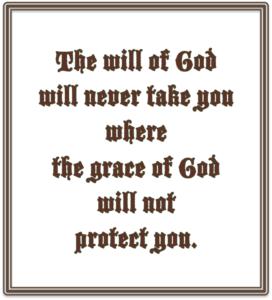 Another customer came in and the man turned away without answering — but not before I saw his other arm, which bore a massive crucifix.

I like the pairing. I wonder if anyone ever asks him about it? Because it is “the will of God,” after all, that took Jesus to the Cross. In the eyes of some, God’s grace did not protect him. But grace was surely with him. And look what God did instead! He lifted his Son not from the Cross, but from the dead. And he did so just when the devil must have thought he had won.

I wish I knew the story behind those two tattoos. What has that man been through, that he would feel the need to declare God’s grace so loudly? Or perhaps, as a friend commented, he simply thought it sounded good. If that’s the truth, I hope he looks down when he’s in trouble, and sees it, and believes.

“If any man would come after me, let him deny himself and take up his cross daily and follow me. For whoever would save his life will lose it; and whoever loses his life for my sake, he will save it” (Luke 9:23-24).

“Now may the God of peace who brought again from the dead our Lord Jesus … equip you with everything good that you may do his will, working in you that which is pleasing in his sight, through Jesus Christ; to whom be glory for ever and ever. Amen.” (Heb 13:20-21)