A year ago I sat, awed, a few feet from the place where tradition has it, the angel Gabriel appeared to Mary.

The enormous Basilica of the Annunciation in Nazareth is built over a small grotto – part of the house where Mary is said to have lived.  The column that stands in it today was placed there to mark the event of the angel’s appearance.  To the back, stairs rise to a small cave called “Mary’s kitchen” and an exit to the yard. 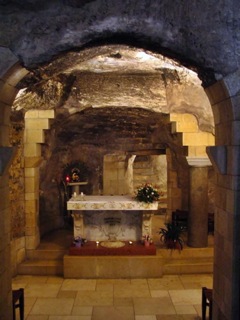 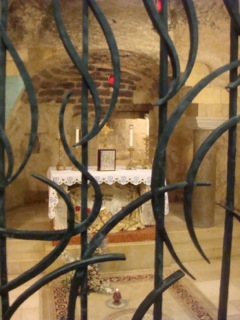 The grotto is normally closed off by an ornate grill – but wonder of wonders, we were allowed to go inside and I sat on a low bench built into the wall, contemplating the altar (on it in latin, Verbum Caro Hic Factum Est – “Here the word was made flesh”) imagining Mary hearing from the angel.  Pondering.  Giving her “yes” to God.

In spite of the ornate additions, the grotto is simple enough to bring to mind a simpler day, an ordinary family, a girl going about her daily chores or (as some of the Fathers have said) reading from the Scriptures.  What did she think, when she heard that angelic voice?  What thoughts went through her mind? I think of times when God asks things of me that don’t make sense.  I don’t always say yes, and a yes doesn’t always come without a struggle.

The other day I came across this beautiful and thought-provoking poem by Denise Leverton (1923-1997).  I share it here in honor of Lady Day, the Feast of the Annunciation:

(Full version, as first published in her book, “A Door in the Hive”)

We know the scene: the room, variously furnished,
almost always a lectern, a book; always
the tall lily.

Arrived on solemn grandeur of great wings,
the angelic ambassador, standing or hovering,
whom she acknowledges, a guest.

But we are told of meek obedience. No one mentions
courage.
The engendering Spirit
did not enter her without consent.

Aren’t there annunciations
of one sort or another
in most lives?

More often
those moments
when roads of light and storm
open from darkness in a man or woman,
are turned away from
in dread, in a wave of weakness, in despair
and with relief.
Ordinary lives continue.
God does not smite them.
But the gates close, the pathway vanishes.

She had been a child who played, ate, slept
like any other child–but unlike others,
wept only for pity, laughed
in joy not triumph.
Compassion and intelligence
fused in her, indivisible.

Called to a destiny more momentous
than any in all of Time,
she did not quail,
only asked
a simple, ‘How can this be?’
and gravely, courteously,
took to heart the angel’s reply,
the astounding ministry she was offered:

to bear in her womb
Infinite weight and lightness; to carry
in hidden, finite inwardness,
nine months of Eternity; to contain
in slender vase of being,
the sum of power–
in narrow flesh,
the sum of light.

Then bring to birth,
push out into air, a Man-child
needing, like any other,
milk and love–
but who was God.

This was the moment no one speaks of,
when she could still refuse.

She did not cry, ‘I cannot. I am not worthy,’
Nor, ‘I have not the strength.’
She did not submit with gritted teeth,
raging, coerced.

Bravest of all humans,
consent illumined her.
The room filled with its light,
the lily glowed in it,
and the iridescent wings. 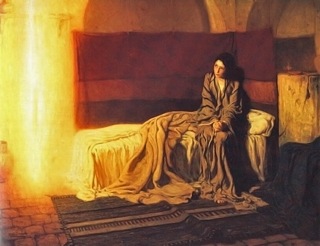 No lectern, book, or even tall lily to be seen – yet this might be my favorite “Annunciation” painting – by Henry Tanner.