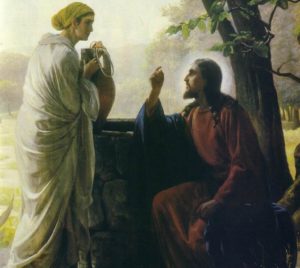 Woman at the Well by Carl Heimlich Bloch

Nobody ever talks about the disciples at the well in Samaria. Everyone zeroes in on the woman, and understandably so: with her many past husbands and her daily slog for water, she represents that “God-shaped vacuum” in all of us that can’t be filled by anything (or anyone!) but God. We all want what she gets: living water that radically transforms her life.

But the story isn’t just about that woman at the well. It’s also about the Lord’s disciples, which is pretty obvious when you pay attention to the way John goes back and forth between them all in chapter 4. Their encounters with Jesus at the well are meant to be read together.

The disciples go with Jesus to Samaria, but they leave him at the well while they go buy food. They get back just as he tells the woman he’s the messiah. And they’re so surprised to see him talking to her, they just stand there. No one asks her what she wants, no one asks him why he’s talking with her. They don’t enter the conversation at all. I often wonder what would have happened, if they did!

In any case – it’s awkward enough that she leaves her water jar and goes off into the city. The disciples then try to get Jesus to eat. But “I have food to eat you know nothing about” he says. They start looking around like they expect to see a McDonald’s bag somewhere and he says — Hey guys, you don’t understand. “My food is to do the will of him who sent me, and to accomplish his work.”

What are they supposed to understand?

The disciples’ story parallels the woman’s

Notice all the parallels between their situation and the woman’s:

Lift up your eyes! Jesus says. Thanks for getting food for me, but I want more than pita and hummus today. I’m hungry for souls, and they’re out there — you just have to look. He challenges the disciples see the spiritual fruit ready to be harvested in the fields, a harvest in which he’s sent them to work. And right then that harvest comes flowing in — as a result of the Samaritan woman’s witness.

I find it interesting that they’re the disciples, but she’s the one who is fruitful.

Why the disciples didn’t get it

I don’t want to be too hard on the men. I’ve been where they are, myself. It seems that they’ve gotten so involved in their own idea of what the Lord needs—they’re so busy with their own work for the Lord—that they can’t see what’s really important, and what’s right in front of their eyes: people who are ready to come to Jesus.

Or maybe it wasn’t that they were too busy, maybe they just couldn’t imagine Samaritans coming to the Lord. I get like that with some people I know, even friends who seem so set in their non-Christian world, I can’t imagine they’d be interested in God. It is easier to say nothing, some times, than to risk an argument.

“Lift up your eyes!” I hear him tell me, as he did the disciples. “I sent you to reap that for which you did not labor; others have labored, and you have entered into their labor.”

It’s not all up to me

How freeing that is! The job isn’t all up to me or anyone else. God has lots of workers in the vineyard. Who knows what seeds others have planted, or what watering is being done? I don’t need to stay in my little corner of the vineyard and just wait for my seeds to take root. We’re all in it together. Maybe there’s someone out there who’s ready to hear about Jesus – and all they need is that one word from me.

I have a theory. Jesus tells the woman that the living water he gives will become a spring in the one who drinks it. A bucket can’t hold a spring. It has to be open at both ends to allow the water to move through. God gives us the gift of life-giving water, but we’re not meant to keep it to ourselves. We need to pass it on.

What harvest is around you, that you can’t see? Look up!

This comes from a talk I first gave at the first W.I.N.E. (Women in the New Evangelization) National Catholic Women’s Conference in Philadelphia, October 2017.