When a new star shone bright enough that grown men (wise men? kings?) saddled up, dropped everything else and set out for the tiny town of Bethlehem, it didn’t herald something unexpected. The king it announced had been expected for centuries! Jesus’s birth was not “Plan B,” some sort of last-ditch effort to save the human race when it resisted all other efforts. God always planned to become one of us, so we could in turn become his.

Recalling the story of why Jesus came can help deepen our own appreciation of Christmas. One time-honored way is the “Jesse Tree” tradition. Based on Isaiah’s prophecy that “a shoot” or royal descendant would come from the “stump of Jesse,” father of King David (see Isaiah 11:1), the original “Jesse trees” took shape in Medieval times as artwork picturing the ancestors of Jesus. The Cathedral of Chartres, for example, has a beautiful Jesse Tree window in stained glass. Over time, the Jesse Tree came to represent not only ancestors of the Messiah, but the whole succession of Old Testament people and events that find their culmination in Christ. 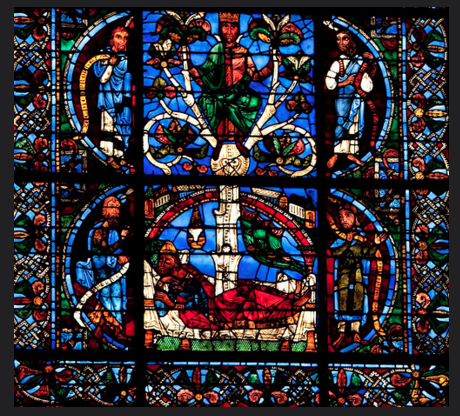 Stained glass window in the Chartres Cathedral, showing the root of the “Jesse Tree” in the father of David.

Jesse Tree Ornaments can be made for a tree . . .

Today, the popular Advent custom combines these events of salvation history with Christmas tree ornaments to mark the days of December leading to Christ’s birth. Every day, a passage of Scripture is read and a new ornament signifying that event is hung on the tree. Ornaments can be made of anything from paper to cookie dough to felt or even clay. The internet is full of lists and patterns for making and using the ornaments, or they can be bought pre-made. 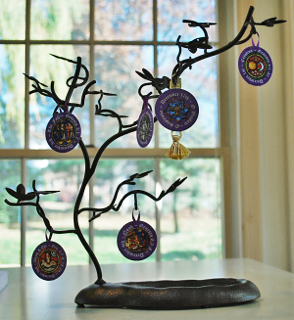 Now that my kids are grown, I find myself less interested in the ornaments than in the readings. Several years ago, I put together a “Grown-up” Jesse Tree: a Bible Reading Plan for Advent. Here’s a link to the free checklist, which includes readings for the “O antiphons” we hear in the week leading up to Christmas, in the liturgy.

Either way, you’ll be ready to hear the abridged version at Christmas

Now with all of salvation history fresh in our minds, come Christmas we’ll hear The Nativity of Our Lord Jesus Christ with fresh ears![1] Here it is —

The Nativity of our Lord Jesus Christ

The Twenty-fifth Day of December,
when ages beyond number had run their course
from the creation of the world,

when God in the beginning created heaven and earth,
and formed man in his own likeness;

when century upon century had passed
since the Almighty set his bow in the clouds after the Great Flood,
as a sign of covenant and peace;

in the twenty-first century since Abraham, our father in faith,
came out of Ur of the Chaldees;

in the thirteenth century since the People of Israel were led by Moses
in the Exodus from Egypt;

around the thousandth year since David was anointed King;

in the sixty-fifth week of the prophecy of Daniel;

in the one hundred and ninety-fourth Olympiad;

in the year seven hundred and fifty-two
since the foundation of the City of Rome;

in the forty-second year of the reign of Caesar Octavian Augustus,
the whole world being at peace,

JESUS CHRIST, eternal God and Son of the eternal Father,
desiring to consecrate the world by his most loving presence,
was conceived by the Holy Spirit,
and when nine months had passed since his conception,
was born of the Virgin Mary in Bethlehem of Judah,
and was made man:

The Nativity of Our Lord Jesus Christ according to the flesh.

Blessings on you as you prepare for Christmas!

[1] The Roman Martyrology declares the birth of Christ by citing a litany of events stretching from creation to his birth. You may have heard it chanted before the Christmas Mass during the night. 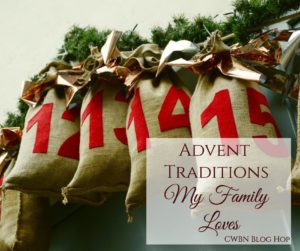 This post is part of a blog hop from the Catholic Women Blogger’s Network (CWBN). Hop on over to the site to see some of the other posts from other bloggers on beloved Advent traditions in their families.