Come and see! It sounds so good a thing to answer that call and yet I don’t always hear it in my life. And sometimes I can’t see, or I won’t see, the Lord or hear when he calls. Is there hope for me when my spiritual senses sleep? 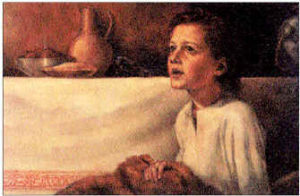 In today’s reading from 1 Samuel 3, two people lie asleep in darkness. Eli, the aged priest, is going blind. He’s a pretty ineffectual priest. Lazy; a negligent parent; insensitive. Eli’s dimming eyes reflect the dimming of his spirit due to sin. When Hannah came weeping to pray at the temple, he assumed she’d had too much to drink. Now he can barely see at all. Verses 1 and 2 pair this fact with another: in those days the word of the Lord was rare; there were not many visions. The nation as a whole is too dull with sin to see or hear (read the preceding chapters in Judges!). Eli, the priest, represents them all.

Read about Samuel and Eli here

But darkness can’t win over light, and as verse 3 points out, Eli’s light may be dim but the lamp of God has not gone out. Samuel was there, in the temple! Surely these two things are related. The people had gone far from God, but He had not left them. And there is hope in this boy Samuel.

Of course, he’s also in the dark, in a way. Samuel’s asleep in the temple as Eli lies asleep in his bed. Then the Lord calls Samuel. It’s like something from Abbot and Costello. Samuel thinks it’s Eli, who sends him back to bed. It happens again. And again. I am struck by God’s patience! He allows awareness and I presume curiosity to build slowly in them both. I’m sure that’s for Eli’s sake as much as Samuel’s. The message is for him, after all, though he can’t hear it.

I doubt either slept again that night. Eli’s anxious to learn what the Lord had to say. Samuel’s afraid to tell him the axe of judgment is about to fall. In the morning comes the truth: Eli’s days of hearing are done. He has ignored the Lord too often. But Samuel, the listening servant, becomes the channel of God’s word to all.

What does it take, to hear and see the Lord?

There’s a warning and hope in the lives of Eli and Samuel. God is patient and persistent. He keeps calling even in the night. He speaks to us in his word. We hear it at mass, we read it in the Bible. Do we listen with open ears? Do we allow it to soak in – listen well enough that we recognize his voice when he calls? And do we act on what we hear? When it’s hard to obey, or we don’t like what we hear, or it seems like a very small thing: do we do it anyway, like Samuel did? Or go on our way like Eli? One way leads to life, the other hardens unto death.

When my world is dark and silent – is it because I’ve turned from God so many times, like Eli, that my refusal or disinterest makes me blind? Or am I asleep, like Samuel; inexperienced and unfamiliar with His voice?

Lord, wake me up! Open my ears and my eyes. Please don’t stop calling. Here I am! I come to do your will.