Years ago, I betrayed the trust of another mom who thought I was watching her child. It was not intentional (I did not know she thought I had her child) so strictly speaking it was not a betrayal, but that is how she felt. Any relationship we might have had was broken. The balm of forgiveness and the help of the Holy Spirit were needed to heal.

The difference a word can make

I think of that as I read of Peter’s post-resurrection encounter with Jesus in John 21:15-19. If you remember, they last spoke when Jesus said (rightly) that Peter would deny him. Now Jesus flat out asks him, “do you love me?” And Peter, knowing Jesus knows, is miserable. He can’t even bring himself to say the “L” word, love. At least not the word that Jesus uses. Seven times the word “love” appears in English in this passage, but in the Greek there’s a difference. Jesus asks if Peter agapes him: does he have total, faithful, to-the-end love for the Lord? And all Peter can reply is “you know I phileo you.” He has brotherly love. I expect he wants to love more. But his past actions show he lacks agape, as he is painfully aware. 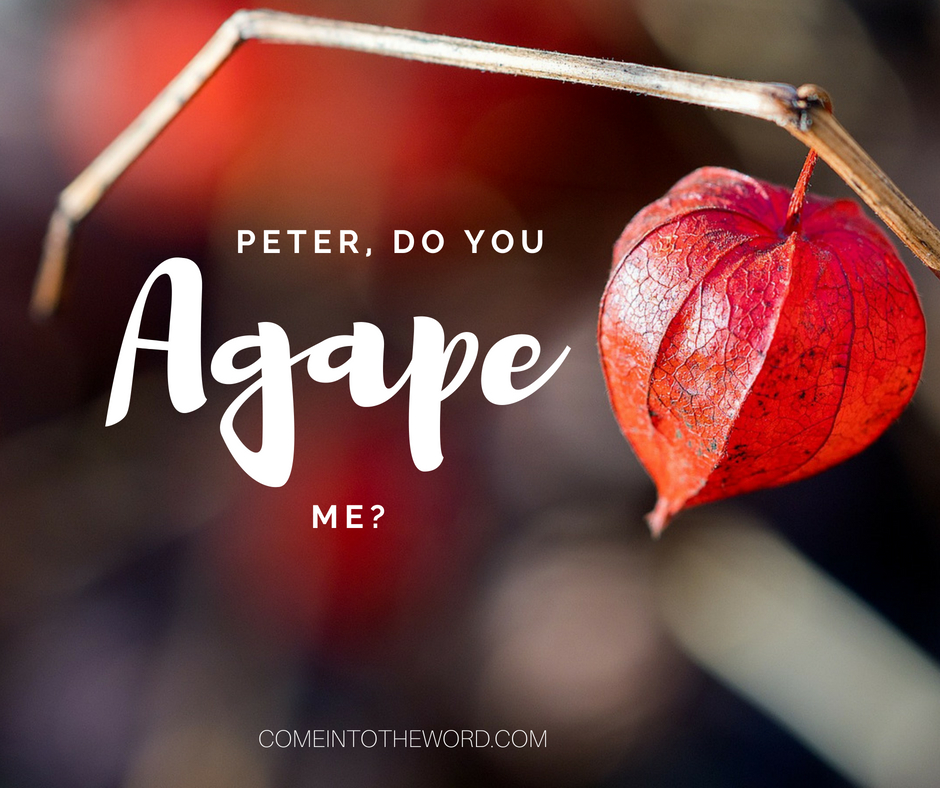 It’s hard to believe this is the same Peter we read about earlier in the gospels. Anguish has replaced bravado. How will Jesus reply?

It really is quite beautiful. After Peter twice meets Jesus’s agape with phileo, Jesus changes his question:

Jesus is meeting Peter where he is. You can’t quite get to agape? Let’s start with phileo. “Peter is grieved” at the change, and throws himself on the Lord’s mercy: “you know everything; you know that I phileo you.” And surprisingly, Jesus doesn’t seem to mind. He doesn’t demote him from “rock” and head of his church, he re-emphasizes his task. “Feed my sheep.” Do what I appointed you to do. Then he alludes to the death that Peter will die: he may have shrunk back in fear when crucifixion loomed, but Peter will die a martyr for Christ. If that isn’t agape love, I don’t know what is!

Greater love has no man than this, that a man lay down his life for his friends. (John 15:13)

“Follow me,” Jesus adds. He doesn’t reject Peter for not being like him now, he calls him to follow. To become like him. Agape love, the kind demonstrated by Christ on the cross, is something that grows. Energized by Jesus’s forgiving love, filled with the Holy Spirit, Peter’s turning back will become a strong and steady charging forward. As he follows Jesus with the love that he has, that love will grow. Agape will come.

This same kind of forgiveness and power is available to us: in our attempts to follow Jesus and also in our attempts to love others. Let us offer the crumbs of poor love that we have and ask that in his hands, they be multiplied and turned into true agape of God and neighbor.