It’s my opinion that Martha is vastly under-rated.

Perhaps that’s appropriate. She’s the patron saint of servants, after all, and servants aren’t meant to garner attention and praise. But a servant in the kingdom of God is great indeed!

With her memorial being celebrated today, I’ve been thinking about Martha’s life and witness in the wider context of biblical descriptions of the great figures in salvation history. And it seems to me she’s right up there with the best.

Martha opens her house to Jesus and his disciples and serves them so that Jesus can teach. It’s tempting to see this as worthless “women’s work.”  Yet the Greek word for her service is diakonia – the word from which we get “deacon.” In Acts 6, seven deacons are set apart to wait on tables so the apostles can devote themselves to prayer and the ministry of the word. These are not lowly servants, they are “men of good repute, full of the Spirit and of wisdom.” Martha’s service is equally of value.

Martha has a close personal relationship with Jesus.

Martha loves the Lord. Not only that, “Jesus loved Martha” (Jn 11:5). Jesus said in John 14:23, “If a man loves me, he will keep my word, and my Father will love him, and we will come to him and make our home with him.” Substitute “woman” for “man” and this could describe Martha, literally. Jesus doesn’t seem to have had a close relationship with his cousins back home.  We don’t see him spending much time with them. He tells a would-be follower that “foxes have holes, and birds of the air have nests; but the Son of man has nowhere to lay his head.” Yet he frequents the home of Martha, stays there when he’s in Jerusalem, seems to be at home with this woman (and her sister and brother) he loves. He even braves mortal danger to comfort Martha and Mary when Lazarus dies (Jn 11). They are very close friends.

Who else is a “friend of God” in Scripture? God called Abraham his friend in Isaiah 41:8. Centuries later, James attributes this to Abraham’s faith completed by works (Jas 2:23-24). Martha’s active faith made her a friend of Jesus just as her faith and service sprang from that friendship. 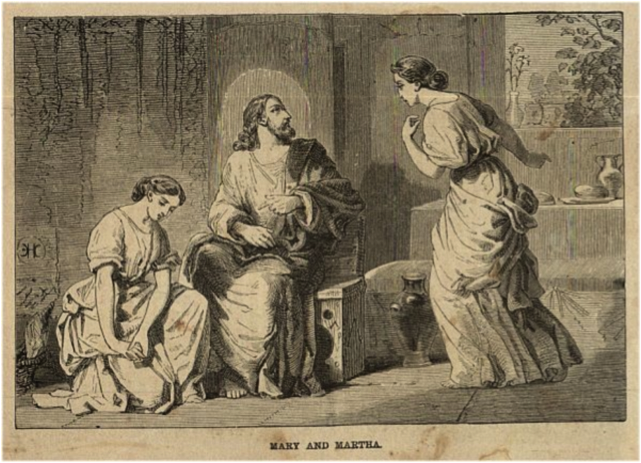 Martha is a woman of faith.

When Jesus asks Martha in John 11 if she believes he is the resurrection and the life, she answers “Yes, Lord; I believe that you are the Christ, the Son of God, he who is coming in to the world.” To break that down, Martha believes Jesus is:

This is astonishing! In all of the gospels, only Peter says anything like this (Mt 16:16). And to his confession, Jesus says “flesh and blood didn’t tell you that;” and “on this rock I will build my church.” That kind of faith isn’t just needed for the man who will lead the church. It’s faith that fills and motivates all disciples of Jesus Christ, and we see it here with Martha. In response to Martha’s confession, Jesus raises Lazarus from the grave, performing the sign that will lead to his own death and resurrection.

Martha isn’t just someone who likes Jesus. She’s not a groupie or a hanger-on. She’s like a rock. She knows the Lord and his life-giving power, she calls on him to raise Lazarus, and she receives her brother back from the dead.

Martha is a teachable disciple.

When we first meet Martha in Luke 9, she’s “distracted with much serving,” “anxious and troubled about many things.” She feels hurt that Mary’s not helping and even more that Jesus doesn’t seem to have noticed her efforts. She wants him to prove his love, to make Mary help. Instead, he gently re-focuses her vision. It’s not he who doesn’t see her, it’s she who doesn’t see him. She’s gotten so preoccupied with the good she’s doing for him, she has lost sight of who she’s doing it for. “One thing is needful,” he says. “Mary has chosen the good portion.” To sit at the feet of Jesus means to be his disciple, but serving, we have seen, is also a disciple’s task. Jesus wants Martha to put first things first, to allow her service to spring from her devotion to him.

The lectionary sometimes pairs this gospel with an Old Testament reading from Genesis. In it, Abraham entertains God in the form of three mysterious visitors. He is as busy as Martha is in Luke 10; running back and forth to ensure their every need is cared for. And yet his attention remains fixed on them. He works hard but they remain his focus. That kind of balance is the fruit of a life in which action is not separated from contemplation but is borne from it. [I’ve often thought this must be why deacons had to be “full of the spirit and of wisdom” to wait on tables. If they weren’t, they might have become distracted and anxious. With the spirit and wisdom, they could serve others and wait on the Lord at the same time.]

In any case, Martha learns her lesson. In John 12, Jesus pays another visit to their household. Mary is at Jesus’ feet again, but we simply read that “Martha served.” She seems to have gained her focus.

The authors of the Bible are unsparing in their portraits of Abraham and Peter, just as they are of Martha. This “father of all who believe” and the “rock” on whom Christ builds his Church are fallible human beings who learn faith over time, just like we see Martha doing. What all three have in common is a deep personal friendship with the Lord. They KNOW whom they believe.

I may be stretching it to compare Martha with such giants of the faith. But the point of our faith is that it’s for me and you, ordinary, fallible human beings that we are. We all are called to be saints.

Lord, I want to be a Martha!

St. Martha, friend and servant of the Lord, pray that we might grow in faith and hope and love and that we too might offer faithful service to the Lord.

The memorial of St. Martha falls on July 29.  Mary and Lazarus are remembered with her on the same day.