Q: How many people does it take to understand an empty tomb?

A: On that first Easter morning, according to John’s gospel, it took three. First responder Mary Magdalene assumed the worst and ran for help. John stopped at the door, noting the cloths left behind. Not until Simon Peter went into the tomb and saw the head cloth rolled by itself did John enter too, and believe.

I find this comforting. It can take me a while to catch on, sometimes! Like Mary M, I’d probably be weeping in a heap outside the door, not recognizing Jesus until he called my name. Meditating on this scene, I can’t help noticing the way understanding dawns slowly for the disciples. But like the dawn, understanding does come to them.

I’d like to share with you what I wrote for the chapter on Easter Sunday for Walk in Her Sandals: Entering the Passion through the Eyes of Women. The following excerpt appears here by permission of Ave Maria Press:

Easter means “East.” To people who look to the sky for time and direction, east is the place of the sunrise. In this case, it announces the Son-rise.

On the third day after his death and burial, Jesus was raised bodily from the tomb.  His resurrection lit up the world like the sun.  As John wrote in the introduction to his gospel, his “life was the light of men.  The light shines in the darkness, and the darkness has not overcome it” (Jn 1:4-5). John had seen the darkness, and now he sees the light.  The fact that the Lord was not dead but had risen, dawned gradually on his followers the way the sun greets a new day:

1. First comes a change in the sky.  The darkness washes slowly away in the light of the approaching rays.

While it was still dark, the women bundled up their spices and ointments and went to the tomb to anoint Jesus’s body.  But neither death nor the stone, the seal, nor the guard had been able to keep him there. Jesus was gone!  It was the first hint of dawn.  But what did it mean?  Mary Magdalene can only wonder. She rushed to the disciples.  “They have taken the Lord out of the tomb, and we do not know where they have laid him” (Jn 20:2).

2. Dawn arrives and the world becomes visible, yet still in shadows.

Peter and John race to the tomb, only to find it empty.  Looking in, they see something Mary Magdalene missed.  No thief has tampered with the tomb.  The linen shroud lies deflated, as though Jesus simply rose out of it. The cloth that covered Jesus’s face remains rolled and set apart from the rest.  Someone raised like Lazarus would unwrap the clothes. Thieves would steal the clothes and leave the body. But even if they wanted Jesus – what thief would strip the body before carrying it, let alone arrange the cloths to look as though they hadn’t been touched?

3. Then light breaks over the horizon, illuminating the world.

Peter and John return home, but Mary Magdalene stays weeping outside the tomb.   “They have taken the Lord out of the tomb,” she says again – this time to an angel – “and we do not know where they have laid him.”  Human sight keeps her from recognizing him when he appears behind her, but then he speaks into her grief.  Jesus calls her by name and with that personal touch, she sees. She clings to him.  Maybe she’s afraid he will leave.  But he gives her something to do.  I must ascend “to my Father and your Father,” he says.  Our Father, who art in heaven.  Go: tell the others.  “I have seen the Lord!” she tells them.  She becomes an “apostle to the apostles,” as she was referred to in early Christian writings.  She is the one who brings them the good news of the Resurrection. 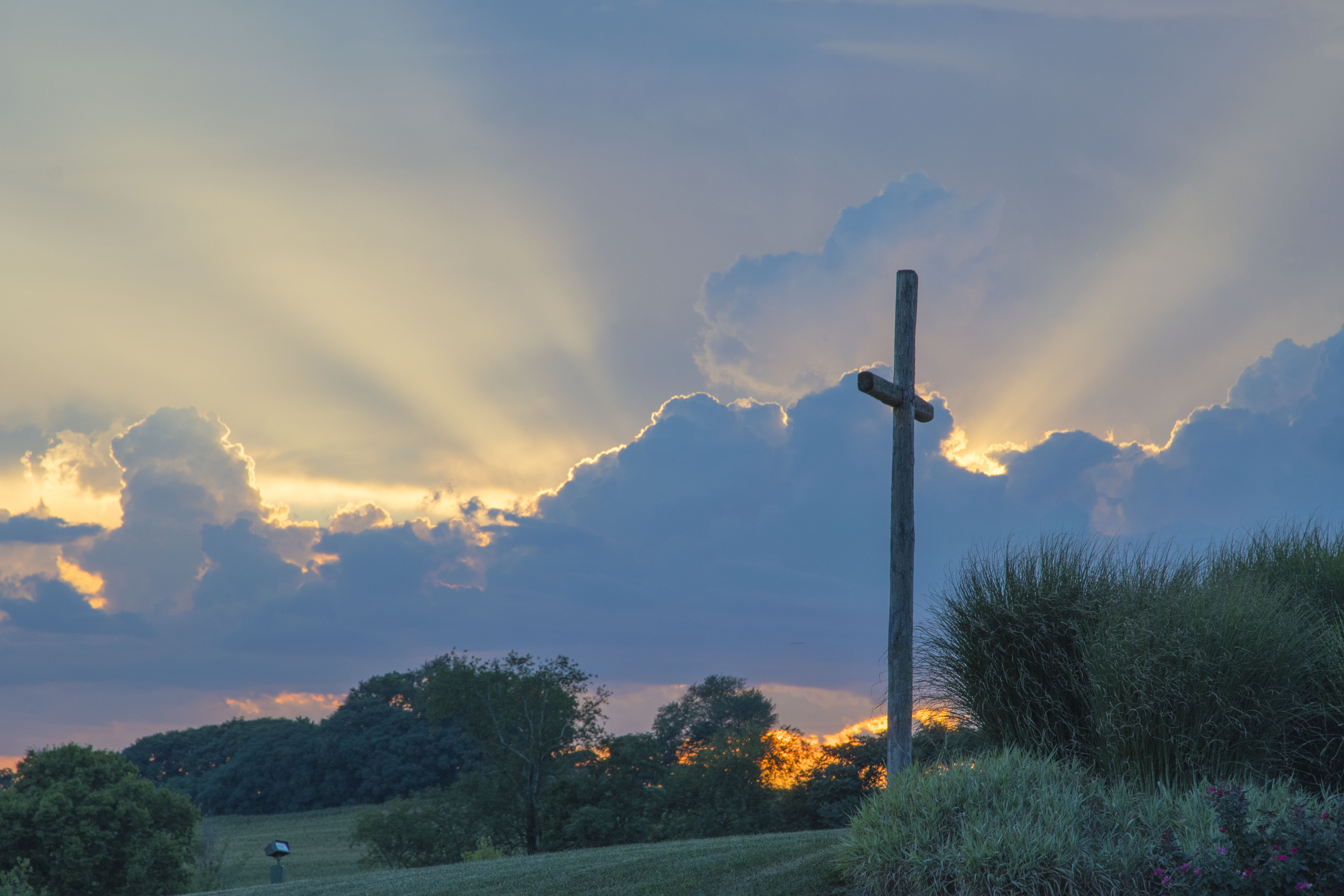 4. Finally, the sun rises and can be seen in the sky.

The apostles are hiding behind locked doors.  They have seen their Lord crucified, and their grief has been upstaged by fear.  The Sabbath is past.  Will the authorities take action now against them?

Jesus appears among them.  His body is recognizable but different.  Locked doors cannot keep him out.  There are holes in his hands and feet and a lance mark in his side.  This is the crucified Jesus, but he is very much alive in a new and risen way.  Those marks of death show that death has no hold on him.

“Mary,” he’d said to the grieving Magdalene.  But fear needs different words.  “Peace be with you,” he says to the apostles.  Then he shows them his wounds, fatal yet somehow swallowed in life. “Peace be with you. As the Father has sent me, even so I send you” (Jn 20:21). Like Mary, they are given something to do.  Is he sending them potentially to death also, yet to a new life regardless?  “Receive the Holy Spirit” and forgive, he adds.  The kingdom of this king will not be about taking revenge or strong-arming others.  With peace and forgiveness it will continue to scatter the dark.

5. As the sun warms the earth, its heat can be felt.

Eight days later, it is another first day of the week.  It is the day of Resurrection that for Christians, will replace the Sabbath.  Thomas, who missed the earlier appearance of Jesus, doubts that he lives.  Again the appearance through closed doors, and this time, Jesus invites Thomas to put his fingers and hands in his wounds.  Mary Magdalene heard, the other disciples saw, and now Thomas feels the Lord.  “My Lord and my God!” he proclaims (Jn 20:28).

“You have believed me because you have seen me,” Jesus says.  “Blessed are those who have not seen and yet believe: (Jn 20:29).

“These [signs] are written that you may believe…and have life in his name,” John concludes (Jn 20:31). Perhaps you, yourself, are “dead” in some way.  Jesus came that you might have life.  “Once you were darkness, but now you are light in the Lord,” St. Paul wrote to the Ephesians.  “Awake, O sleeper, and arise from the dead, and Christ shall give you light” (Eph 5:14). 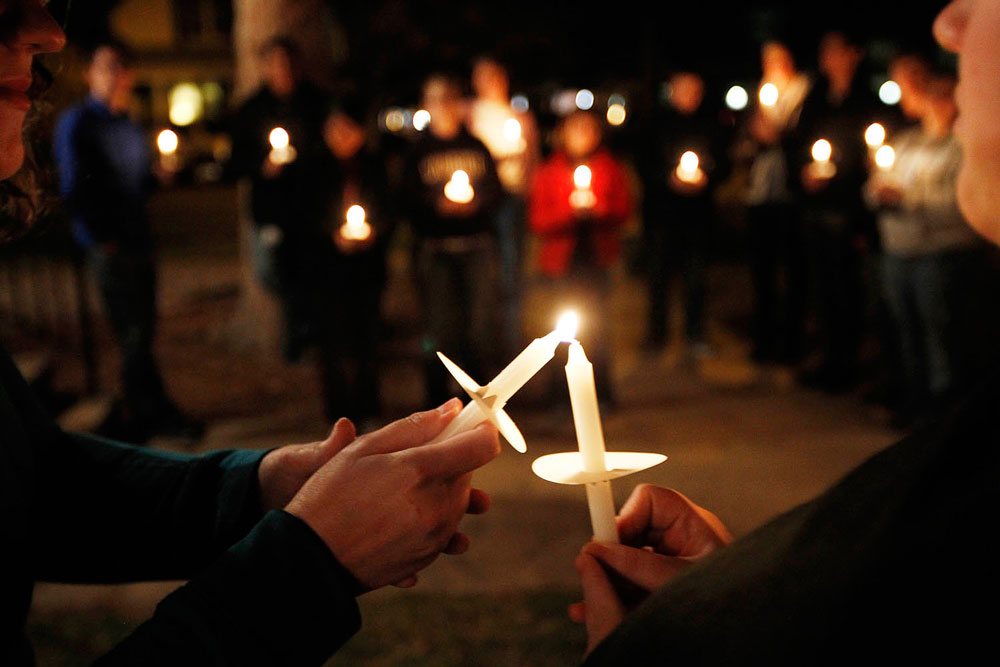 Every year, I look forward to the Easter Vigil and its Service of Light. We start in darkness, and light slowly dawns as a thousand tiny candles are lit from Paschal candle. As I prepare to enter into the dark “tomb” of the church tonight, I take like Mary Magdalene my fears and pain. Like Simon Peter and the other disciple, I go in to see what I can see. I open my ears and listen for the Lord’s voice calling me.

“Woman, why are you weeping? Whom do you seek?”

Hope in the Lord!
For with the Lord there is steadfast love,
and with him is plenteous redemption.
And he will redeem (you) from all (your) iniquities.
(Psalm 130:7-8)

Have a blessed Easter! 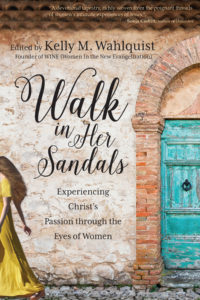 “Walk in Her Sandals” is available from Women in the New Evangelization (WINE) or Ave Maria Press.